The Fantastic Voyages of Ray Harryhausen

Hello, Acting Fans, it's blog time again and this Wednesday it's a bit of a break from the goings on at H&H Productions. You see we'd like to take the time to mourn the passing and salute the work of a Hollywood Legend - Mr. Ray Harryhausen.

Ray's special effects in his various fantasy features are virtually in our bones at H&H Productions, thanks to otherwise-boring Bank Holiday weekends or rainy summer school holidays. His craft in Stop-Motion work lifted young imaginations into flight just like his own had been when he saw Willis O'Brien's work in King Kong as a child himself. When he walked out of the cinema he knew exactly what he wanted to do and eventually (even being mentored early on by O'Brien himself) he got there, crafting spectacular and dreamlike impossible sequences, often single-handedly. The man sure had plenty of anecdotes about the trials and tribulations of being THE special effects man and you can read a lot of them here: 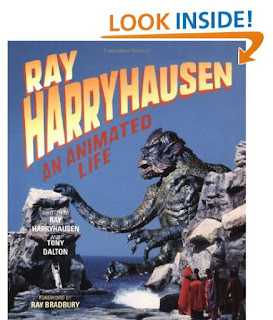 When asked about the main portion of his career he would often say, "It's all in the book!" In fact one time he even said it to me:

Yes, Acting Fans, your truly got to meet a Hollywood Legend and thank him for the amazing things he'd brought to our screens. Heck, I even got told an anecdote that ISN'T in the book! And, well, I'm not going to write it here but if you ever meet me I might just tell it to you - for the price of a drink!

Anyway we (myself & Vern) would once again thank Ray for his fantastic work, and for the lesson that if you really want to do something, you should do it! Thanks, Ray, we hope your last amazing voyage is a great one!