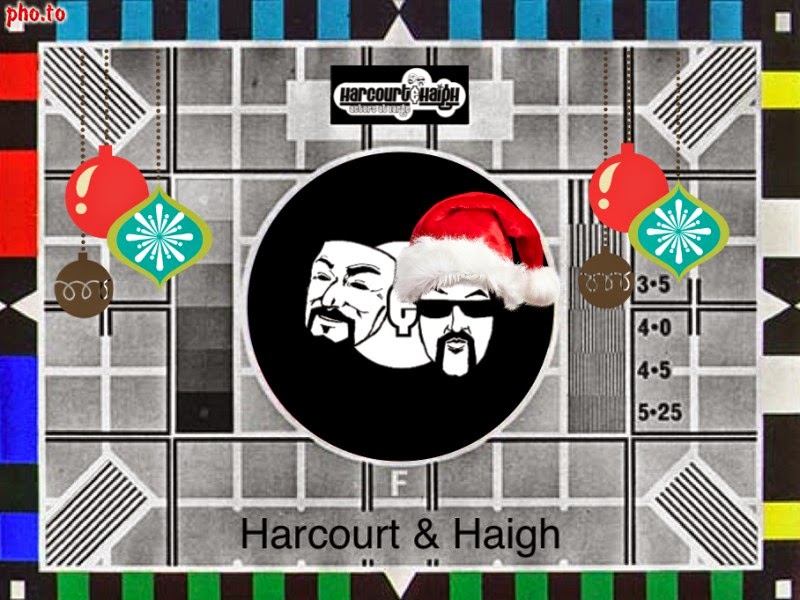 Festive Greeting, Acting Fans!!! Yes, after all the skirting-around-the-issue-because-Dammit-it's-not-close-enough-to-Christmas-yet the Season has sprung it's steely jaws on us and we can no longer deny the tide of Christmas! Luckily, as some of you may already know, we have our bit of annual festive fun ready in the form of the latest, and last video of 2014, Actor's Log Vlog:

I mean, what could be more festive than a visit to Antarctica and Santa's pre-Christmas holiday hideaway? Anyway the keen-eyed among you will have spotted the key phrase 'and last video of 2014' that I went and slipped in there and, yes, I'm sorry, it's true whilst we run about like headless chickens looking for that last-minute stocking filler, picking up the party booze, doing both the Christmas Wrapping & the Christmas Rapping and stuffing our faces with mince pies and other Festive Treats the H&H Youtube channel and this here Production Blog will be having their annual Winter Hiatus Hibernation. Don't worry, it's only sleeping and we will be back with you in the 2000 plus 15!
Until then Happy Holidays and the very Merriest of Christmases to you all, do it the thespian way and all of you break a (metaphorical) leg, all the best for 2015, We'll see you in the World of TOMORROW!!!

Welcome Acting Fans, fellow bloggers and People of the Worlds Internet - it's once again Friday and time for a catch up on what's been happing at ol' H&H HQ.

Well once again the Wednesday Blog entry was conspicuous in it's absence BUT with a good reason. Not only was it Chris's works do with his Box Office ladies BUT we finally managed to get out and film the Christmas Vlog, yep, once again we got behind and in front of the camera. Not only outdoors neither. After I did some scouting out on Manor Heath park we had realised we had to recoded our voices on my phone (of which I have to buy so we can getting off my phone) because of bad winds. As we were heading out there though we got talking of somewhere else we could try. A place where it would be easier to get more of the white sky we needed in shot without it looking like too much of a staged angle. Which got me thinking to a previous place we once used. It was in fact a place we used waaaay back when we did Series One. Yep, H&H were once more on the rocks, the rocks at Albert promenade, that is.

When we got there it was just right, much better than our first idea in fact. The only problem was it was just as windy as Manor Heath, if not more, and BLOOMIN' FREEEEEZIN' ,and I hadn't got any gloves with me as I couldn't find a matching pair (which I later realised would have had some added comedy value - D'OH!). Something I would come to regret as my hands were like Ice blocks after the shoot. After a few runthroughs of the lines and marking out were we where going to stand, we were off to filming. Of course, with it being windy I had to hold on to my hat for dear life especially as it had already flown off for me to chase down the road a few times during the line run (lucky the road was quiet) and, in true H&H style, it did take us a few goes and with extra lines added into the flow of the scene. Some by necessity as myself and Chris had missed a massive geographical error in our original script, can you guess what it was, folks? (Probably not yet as you haven't seen the Xmas Vlog yet but when you do try to spot the the lampshaded excuse!)

When we started to use the my phone we needed to sync up the sound to so we could edit it easier. The best way is just a loud noise on camera but don't try and clap with freezing cold hands like I did. OUCH. Yep, I was an fool. And a sore-handed one too. After that we went on and got it done but, just as we were about to pack up, we remembered to do the end scene too that also had to be outside. Yep, we almost forgot the end, but as we were doing the recording my phone cut off, yep, the battery died, piggin' iPhones! So we had to go with what we had. Then it was to film the Interiors which, once again, led to a quick run down the Y.M.C.A ,well, after showbiz lunch, of course.

The Y.M.C.A was very kind in letting us once again assisting in our crimes against the internet and use the their building for the shoot, which was lucky as the decor was just the look we needed for it (I can't say any more, [SPOILERS]) so, after setting up and line runthroughs, it was a go and, well, I at first just couldn't get the flow right of one of lines I kept on falling over them. Despite having done some rehearsing of these scenes and blocking them out so we knew where we were to move and stand, it just wouldn't flow, so between us we worked out a streamlined version that made the scenes a bit pacier and also were more natural for speech (a lesson to do more reading out loud of what we have written to check the flow of our dialogue). This by our usual Actor's Log Vlog standards was very smooth and, once again, we got a lot done in one day. We are getting better at these. I mean we should be by now we've being doing the vlogs for just over a year!

The Xmas Vlog shall be beaming to your eyes soon, so please look out for it.
And see you in the FUTURE!

Posted by Vernon Harcourt at 11:44 AM No comments:

Email ThisBlogThis!Share to TwitterShare to FacebookShare to Pinterest
Labels: Actor's Log, Actors At Large, Christmas Vlog, Coming Soon, getting on with it, HARCOURT and HAIGH, Merry Christmas, xmas

Hello, Acting Fans, fellow bloggers and people of the Internet, It's Friday once again and only THREE WEEKS until Christmas. (Yes, I know it's the mad rush time.) So what's has been happening in the ol' H&H front down at H&H HQ, and are we anywhere near to getting the Christmas Vlog filmed, will it be done in time?!

Well, well, that's a lot of questions you have there, so I shall get to answering them for you. First me, myself and Chris did get a meet-up in this week and a good ol' chin wag did we have. (Yep, we sure did) we talked about all sorts of things. From the new Star Wars trailer (I dig it, Chris is coming around to it despite Abrams-scepticism, which I don't blame him for since 'Into Darkness') to Jurassic World (set in a universe with entirely different Health & Safety legislature than ours) then on to other films and stars and such. We even got on to how we can fix the Fantastic Four film franchise and how it should be written and done. I if I do say so myself, it's a much better idea than the rubbish 'grounded' take that 20th Century Fox has in mind, I'm not the biggest fan of the FF myself but even I would want to watch our version. Just a shame we are not paid screenwriters as it would be a much better film. In fact the idea is so good we are considering writing it out for ourselves just as an creative exercise, but that's for NEXT year (We've still got to finish this one off for now). Fox, call us.


And so on to the next point the Christmas Vlog and where it is at, well, we was going to try and film some of it on Wednesday. At least the exterior shots, but as is bloody typical for H&H outdoor shoots the weather was against us, nope, not wind, nope, not rain neither, we had a piggin' clear blue sky, and what we NEEDED was a cloudy white sky! Bloody weather! *Shakes fist at sky* So that's why you got no blog from Chris on Wednesday, we had nothing to report (and he needed to chill out after our epic rambling conversation). He's not done nothing entirely though. On Thursday he took to sourcing some the film footage that we are intersplicing into our Christmas Vlog. A certain film, and, nope, I am not going to tell which film it is yet. You will have to watch the Actor's Log vlog when it comes out to know. Once again Chris got most of what we need, despite having to upload most of the film for the few bits we need. With that film footage down and ready to go it's now time to get on with filming. Which shall be happening soon, well, as soon as the weather is in the exterior shoots favour, it's fairly short and hopefully not too difficult, but we may have to record our voices on my phone and sync it up due to high wind sounds and our Nemesis TRAFFIC. Bloody traffic! Luckily I got an app to record voices, so it shouldn't be too difficult to do. Well, here's hoping that isn't!

That's all for now, so see you in the Future!!!

Posted by Vernon Harcourt at 5:11 PM No comments: