Posted by HARCOURT & HAIGH at 4:41 PM No comments:

This Is Just a Tribute

This week see's a couple of historic milestones for us here at H&H Productions, one of them a little sad.
So let's start with the bad (and now pretty old) news first, this week sees the anniversary of the death on 24th November, 1991 of (IOHM*) one of the 20th century's finest showmen, Farrokh Bulsara AKA Freddie Mercury, lead singer of Queen. As late 70s/early 80s kids Freddie and Queen were at the forefront of our formative Pop Cultural experience and, of course, besides great hit tunes as geeky 70s/80s kids he (& the rest of Queen) also provided the soundtrack to not one but TWO firm favourite cult films:


Forget Star Wars (remember it started off as Lucas' pitch for a Flash Gordon film) plus Max Von Sydow, Peter Wyngarde AND Brian Blessed in one film - no computer-controlled FX models can compete with that sort of cast. Anyone who disagrees gets the Bore Worms.
And then the film that spawned a far-spanning franchise of infinitely reducing returns but it's so good we forgive it it's rubbish sequels:


A sad day but a great one to remember the talent of the man and as he himself once sang, the show must go on. So long, Freddie and thanks for all the tunes.


While we're talking about 'shows going on' that brings us to the happier news. This week also saw the anniversary of a groundbreaking television series that first hit the TV screen on 23 November, 1963. That day BBC 1 broadcast the first episode 'An Unearthly Child' and two unwitting schoolteachers and the British public were introduced to a certain mad man (who's not really a man) with a blue box.
Despite the hiccup of being laid low in the 90s (yeah, thanks a lot, Michael Grade, we don't think *shaking fists towards London*), thanks to Russell T. Davies and BBC Wales the Doctor has enjoyed a wildly successful revival these past few years. Here at H&H we are always ready to salute the sort of fiction that stops staring in the kitchen sink and gets you to look out the window at the stars above, so Happy 48th Birthday DOCTOR WHO, long may you transcend Time and Space!


(The only November broadcast Christmas advert that we support, plus it's for charity, innit?)

A Happy Whonniversary to you all!

* = In Our Humble Opinions but of course, you figured that out, didn't you? After all, You're not total n00bs are you? What, you ARE?!
Posted by HARCOURT & HAIGH at 9:21 AM No comments:

Guerillas In The Midst 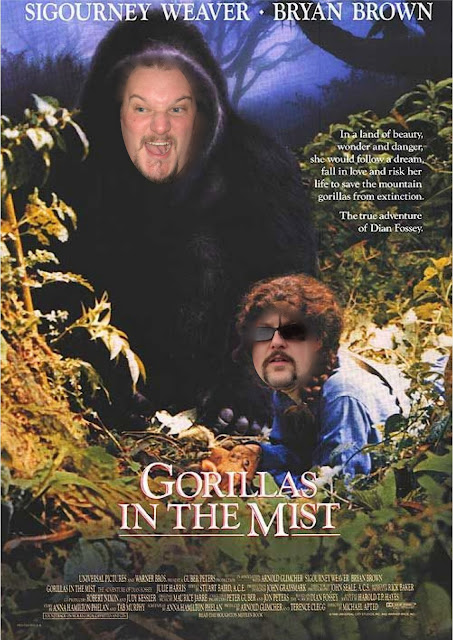 After filming on the fly, during the shooting this foggy weekend gone, some simple rules to follow when you’re a Low-Budget/No-Budget feature came to our attention.

Rules of Guerrilla filmmaking according to Harcourt & Haigh:

Follow these simple rule and your shoots shall be successful, until next time.

Give Us Our Props III

Our brief hiatus on series shooting gives us the opportunity to catch up on a bit of the old prop production. Progress on [REDACTED MYSTERY PROP] continues at a slow but steady pace.

We're taking our time with [REDACTED MYSTERY PROP] as it's pretty demanding on our very basic carpentry skills (flat-pack furniture = a doddle, handling a Jigsaw (the power tool, not the perennial grandparent-preferred puzzle, you mook!) = I have never been more afraid in my life) and it has a very large possibility for error but, if we pull it off, it'll be brilliant (if we say so ourselves).
As we've said before though some stuff comes to us easier, take for instance this little beauty, BEHOLD:

Originally we envisioned something of a standard armoury-style gun rack for our two criminally-inclined actors. Further thought made that seem a bit too professionally criminal/possibly psychotic (as well as difficult to construct) we decided something more whimsical or comical was called for and so the concept of 'The Umbrella Stand Of Dooom' was born. Hang on, where do we get an Umbrella stand from? Well, it turns out Poundstretcher, the budget filmmakers' boon.
On a random scouring of the budget stores for stuff that is a) cheap and b) possibly useful (and not at all for cut price collectible toys), Chris came across a neat looking fake-leather laundry basket and, like an idiot, promptly took a picture of it and left it there.
You may hazard a guess as to what happened next after Chris consulted Vern and later returned to the shop to pick it up. What did you guess? It wasn't there? Well, you're almost right. SOME of it wasn't there, the lid in fact, which also had the price on it, had been nicked. It was then that Chris's inner yorkshireman came to the fore, as he realised, not needing the lid, he might be able to get it... cheaper!
After swift negotiation with the shop manager he soon left bearing his prize, a formerly £17 Leatherette Laundry Basket now lidless but a seven whole pounds (seven pounds later squandered on booze) cheaper. VICTORY!
And thus a Legend was born!
If that Epic Tale Of Successful Shopping hasn't thrilled you enough, we leave you with another sexy image of Hearthrob Harcourt on the Rocks:

Posted by HARCOURT & HAIGH at 1:00 PM No comments:

It is my sad duty to report a hump in the road in the series production for Harcourt & Haigh:Actors At Large. Production has come to a temporary hiatus due to unfortunate circumstances.
Matt has sought it here and sought it there, the damned elusive power cord, and it remains nowhere to be found. Never fear, acting fans, Vern and Myself are going over the production budget (in other words trawling through our spare pants pockets, clearing the moths from our wallets and having a look down the back of the sofa) to cobble together the funds for a new one.
Meanwhile the writing of two more episode scripts for series 1 is underway and we are looking at setting up the next scene for shooting, perhaps with an eye to using our backup (maybe it's time to polish off the promos). While you wait for more tangible updates here's an elliptically related tune by Sunna:

Posted by HARCOURT & HAIGH at 3:11 PM No comments: 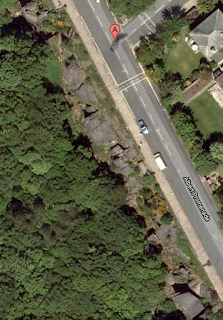 Hot Off The Presses

It's HERE! The first (& quite possibly only) issue of 'HARCOURT& HAIGH:Actors At Large' the Magazine! Strap yourselves in for what quite possibly may be the one of the greatest illustrated epics yet produced, a photostrip prequel to the upcoming web series... 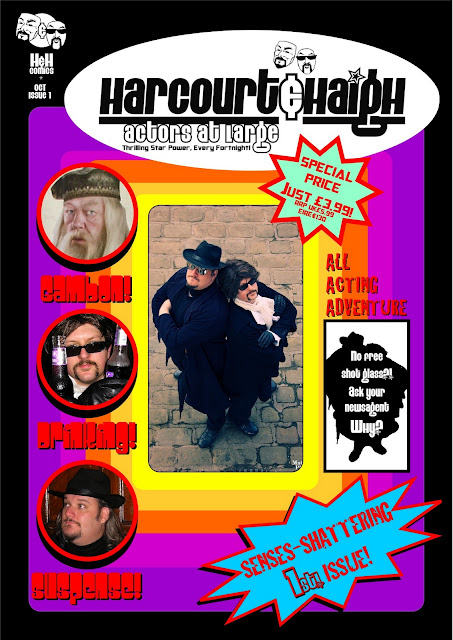 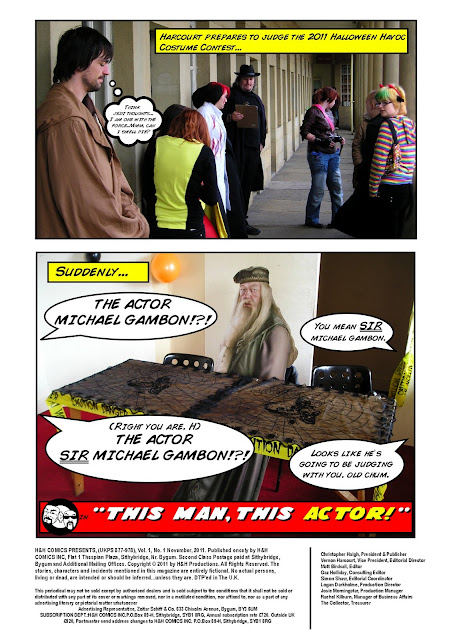 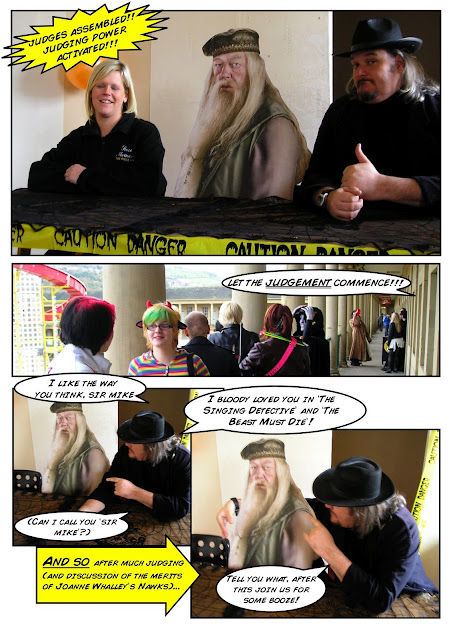 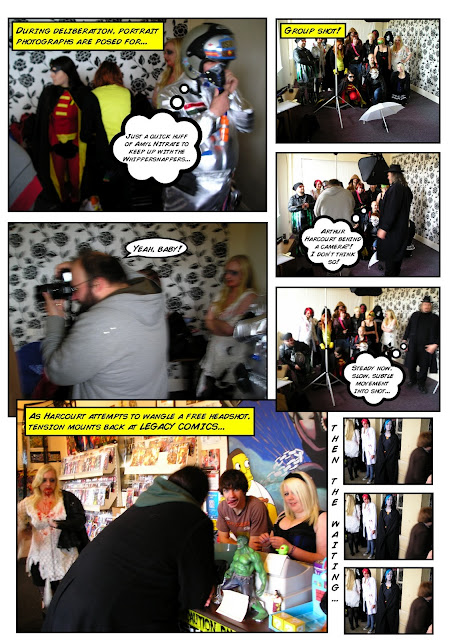 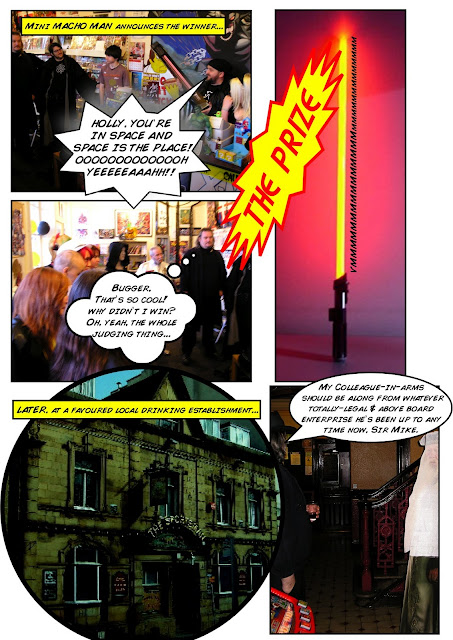 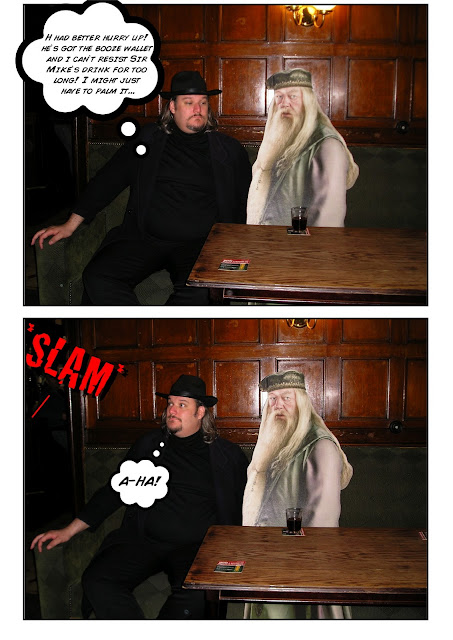 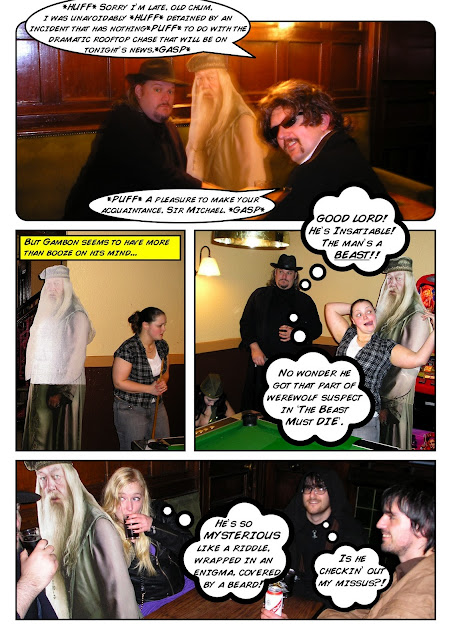 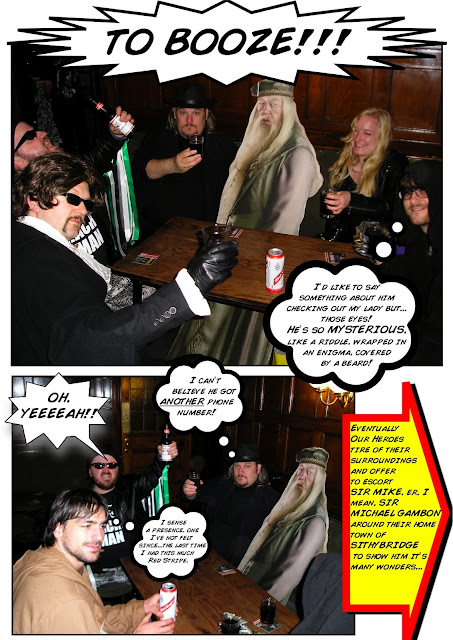 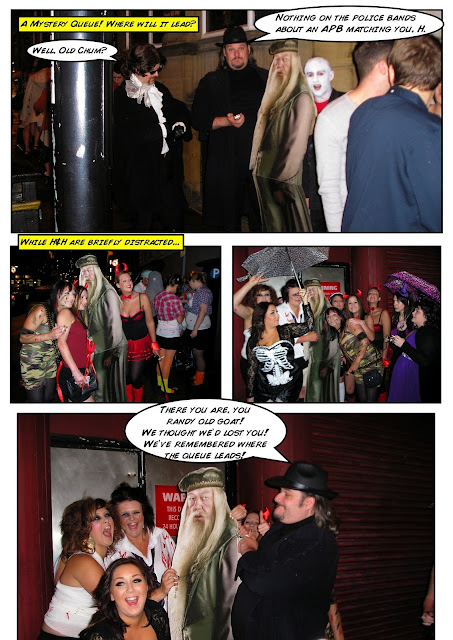 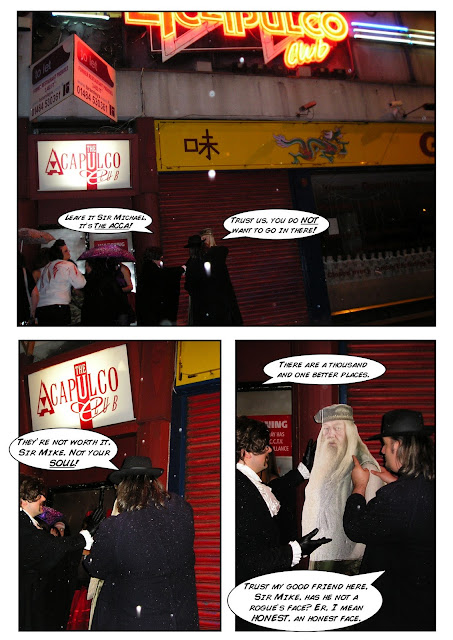 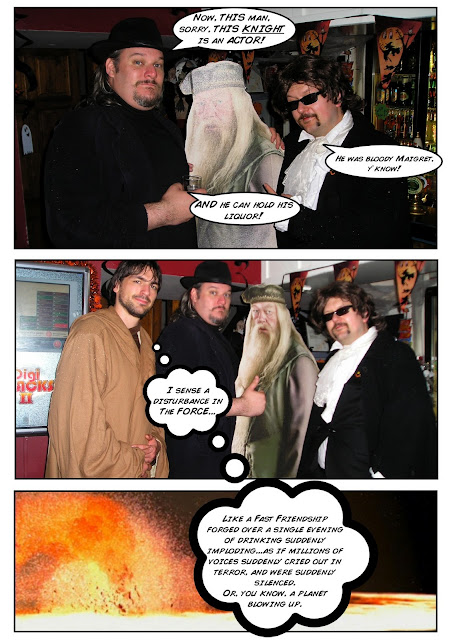 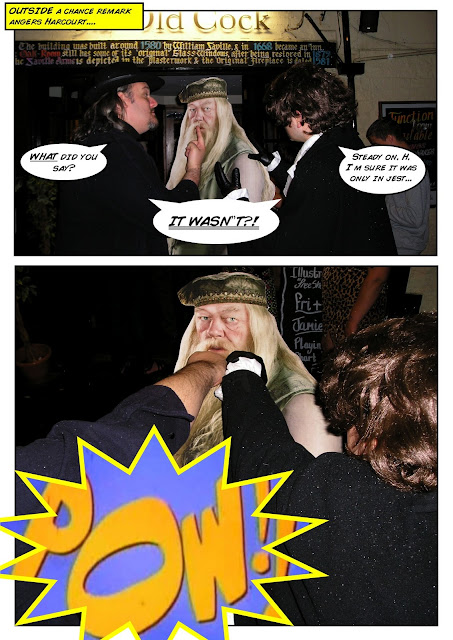 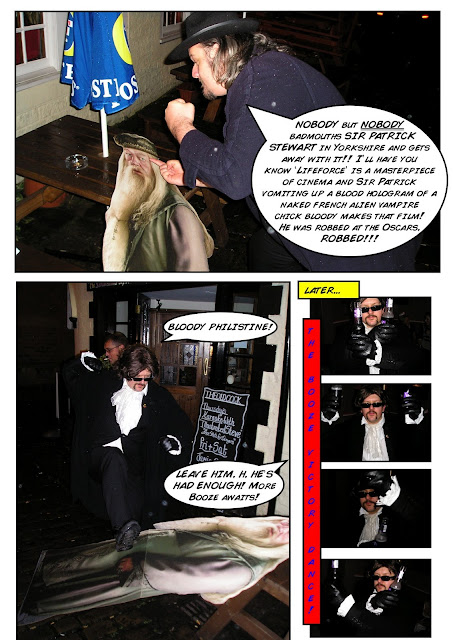 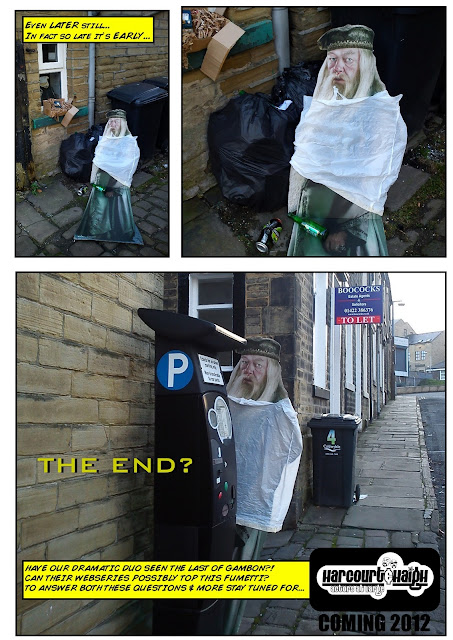 Check with Your Local Retail Newsagents!

Here at H&H HQ (well, one of them, I don't live with Vern - I'm still living in Denial, yes) things continue apace. We were hoping to bring you something a little special today but Time, as ever, has proved to be a harsh mistress.
It being such a potentially long time until the actual series (*Vern & I looking worriedly, brows furrowed, at weather reports that predict a harsh siberian-class winter*) we thought it would be nice to give you a treat in the form of a short Fumetti-style prequel to the series but due to issues with the Publisher (i.e, Me and my DTP'ing skills, or lack thereof) instead today we are just going to tease you with it:

So at the weekend this happened:

Which meant that THIS happened (yes, really):

A flat Camera Battery and lack of access to electrickery meant we got curtailed on Take No.6 of the first filmed scene of the series ('Ships Ahoy!': Scene 2).
Still, chance favours the prepared minds, so we soldiered on.
With Vernon having wangled his way onto the Havoc Costume Contest judging panel (in character of course) we took the opportunity to improvise a dialogue-free scene that could be purposed for another episode and took a shot for one of the Promos still on our To-Do list using a backup digital camera. Despite a bit of bad luck to start we didn't end the day empty handed.
Another thing that happened at the Havoc, well there was an extra 'Special Guest' on the panel of Judges:

And, bless him, he turned up in costume too.
Alright, we admit it - it isn't the REAL Sir Michael Gambon but there is rhyme and reason to his being there.
In fact, later that Pre-Halloween Evening, this happened:

Tune in this Friday to find out why.

Posted by HARCOURT & HAIGH at 4:47 PM No comments: