Greetings, Acting Fans, and welcome once again to our mid-week missive. As you may have noticed the latest 'Actor's Log' has escaped into the wild and, if you haven't noticed here it is right HERE:


That's right we're on Vlog #11 but sadly, even though we're champing at the bit, circumstances mean that we can't get on with the next 'Actor's Log' this week as planned. Although for once it's actually Vern's schedule that's in the way this time. Yep, I'm free and clear most of this week but our Colossal Acting talent is otherwise occupied. I suppose turnabout is fair play. We do need to crack on though as the next vlog is time(or rather growth)-sensitive. Keen observers of the above video may have a clue as to why.
Despite not being able to get on with a shoot this week we have managed our first meet-up post-vlog. The main topic of which (besides sorting the next shoot of course) was indents. For quite some time we have resisted the urge to follow suit with the Youtube video trend of having a 'Like & Subscribe' request at the end of our videos, now though as we see the slow but steady views and the odd 'Like' - which we are very grateful for but they have so far not nearly reached the same amount of views or likes per video as the number of people on our Facebook Fan Page. For the visibility and profile of the channel and the videos the more watches, likes and youtube subscriptions, the better. So we are going to experiment with a number of indents at the end of our upcoming videos to see how and indeed if they are effective.


That's all for this week so far, Internet Chums, so do please continue to watch (& hopefully enjoy) our videos, if you do enjoy them please click the 'Like' thumbs-up symbol (see above) and subscribe to our Youtube channel for our latest video updates!

Posted by HARCOURT & HAIGH at 6:16 PM No comments:

Funeral For A Friend

No H&H update today. We are going dark for the funeral of a friend, that I am attending today.
He made this happen:

Greetings, old Acting Chums, and a Happy Batman Day to you all! That's right TODAY is BATMAN DAY, celebrating 75 years of everybody's favourite Caped Crusader. If you don't believe me, just ask DC! Yes, the old Batarang-throwing codger is getting on a bit but he can still, well, twang a Batarang.
Besides the Bat-Birthday though, there's something even more important that has taken place today! More important than Batman?! Well, of COURSE it can be only one thing! Yes, you've guessed it - post-play our Colossal Acting Talent was rip-roaring and ready to go with the next Actor's Log, so we've only gone and filmed it today! 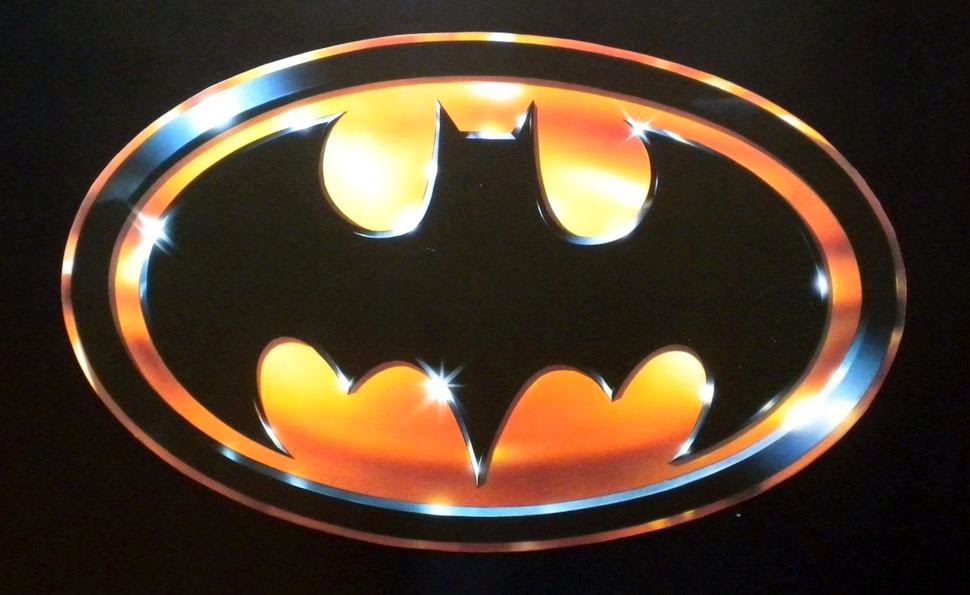 That's the truth, we've been a Dynamic Duo ourselves with this latest bit of business called show, refusing to let the heat (or the humidity) prostrate us. We even experimented with a looser more ad-libbed approach to the whole thing. Fings crossed the whole thing comes together in the Editing Suite, which I'll now get back to! Yes, that means it's time to type...

Posted by HARCOURT & HAIGH at 9:17 PM No comments:

Email ThisBlogThis!Share to TwitterShare to FacebookShare to Pinterest
Labels: 75th Anniversary, Actor's Log, Actors At Large, Batman Day, Filming, getting on with it, HARCOURT and HAIGH, In Production, New HQ

Yes, it's midweek once again, Acting Fans, and that means, if you are TRUE Acting Fans, you still have THREE chances to catch the Colossal Acting Talent hinself treading the boards at The Actor's Workshop as The Chief in 'One Flew Over The Cuckoo's Nest'. 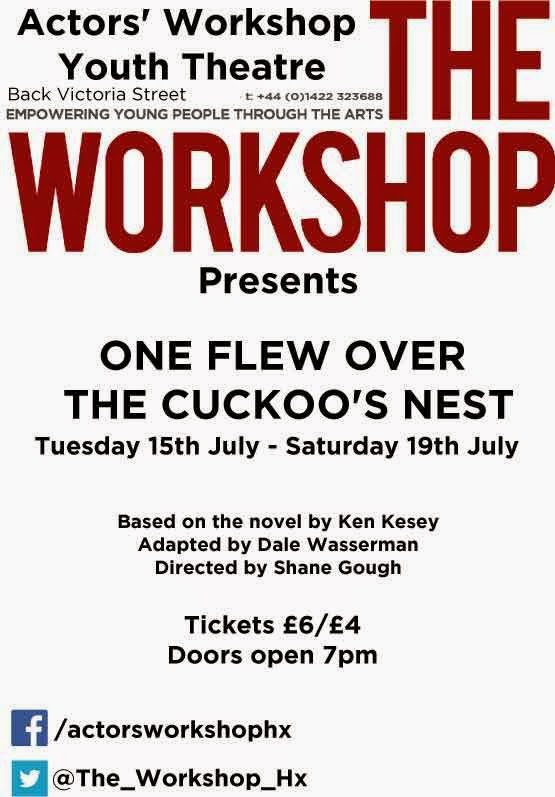 Despite taking to the stage for the first time Tuesday night this week (and a work meeting for yours truly) we managed a meet-up at our usual locale and, after our usual meandering, we've only gone and come up with an Actor's Log idea that, well, it actually supercedes what we were going to do originally and jumps to the front of the filming schedule and it's all down to me watching a bit of mid-morning telly with my parents. Mum & Dad have a daytime TV programme they watch fairly regularly and, well, Mum turned to me and said, 'You should do a H&H version'. After talking it over with Vern over our coffees, we realised she was right - so thank you, Mum! Now all we have to do is get on with it. First though, we're going to let Vern get his board-treading out of the way. So do please remember to support your local actors! Ah, go on!

Email ThisBlogThis!Share to TwitterShare to FacebookShare to Pinterest
Labels: ACTING, ACTING!, Actors At Large, getting on with it, HARCOURT and HAIGH, Mum!, Stolen Idea, Sudden Inspiration, Thanks, The Theatre Darling!, Theatre

One Of Our Cast Is Missing

Hello Acting Fans, fellow bloggers and People of the Internet, Once again apologies we hope there was no offence with us missing a post on Wednesday but, between Chris' shift patterns and my Press Call (and a 40 minute wait for a bus after an annoying late shift Wednesday night that left Chris not in the mood to throw something together, when he didn't have anything new to add because), we weren't able to meet-up until Thursday.

Yes, I had to do a press release for the play wot I am in 'One Flew Over The Cuckoo's Nest' and I knew I had to change one's appearance for the play but wasn't expecting to have to do it this soon to be ready for the Press Call too! What have I done? Well, you see those Native Americans are very particularly about hair, and where it is, or isn't. So now where I did have some hair, now there isn't any. I know it was a shock to me too! As while getting ready it dawned on me the show is now NEXT WEEK! Wow! That's come around fast indeed. I can feel my terrexcitement rising as I type! You can probably see some of it in my shorn face here:


So this Thursday (THE DAY OF THOOOOOOR! *Ahem* 10/07/14) we got a meet-up in and once again talked about our usual around the house stuff first, And gotthen on to H&H business we got a quick idea for an Actor's Log that will have to be done quick. Which involves (& was inspired by) my current appearance and it may also tie in to some others we have planned too. We also sketched another couple of ideas out for future development and, being pretty organised this time, we mapped out this apologetic blog post.

Well, that was it this time other than still trying to work out a way to sneak up on the ever more elusive episode 6 of series 1. I promise we shall get it done. We shall indeed. You have my word as an ACTOR!

Posted by Vernon Harcourt at 6:02 PM No comments:

Email ThisBlogThis!Share to TwitterShare to FacebookShare to Pinterest
Labels: ACTING!, Actor's Log, Actors At Large, cuckoo, getting on with it, HARCOURT and HAIGH, Missing, One Flew Over The Cuckoo's Nest, The Theatre Darling!, Theatre

I Want My Independence

Hello Acting Fans, fellow bloggers and people of the Internet, it is once again Friday and it's the fourth of July where we in the UK celebrate no longer having to put up with a bunch of barmy puritans we managed to get shot of (yes, yes, Independence day if you must put it like that). More importantly, of course, it is time once again for another up date on the H&H front so, what have we been doing?
Erm......erm...well, after the meeting on Wednesday, where we sorted out a few things and planned our next shoot, we...ah...haven't had time for a 2nd meet up.

In the meantime I have been combing through the Vlogs that we have written down at the moment, to see which one we are going to shoot next and there are one or two we can do. But I cannot tell you any more as of yet, as it might ruin the surprise when they come out. Yes, anything else would be [SPOILERS].

Other than that I have been learning my line for my appearance in the up and coming Actor's Workshop production of 'One Flew Over The Cuckoo's Nest'. It's getting every closer to being on. *Looks at calendar* In two weeks in fact! EEP! So, yep, I'd best get to it! And, yes, as the Chief I do actually have some lines, mainly in the 2nd act. The first act is harder though and that's the part with no lines! Though I've literally nothing to say, I still have to be on stage during it and I have to listen. I've also recorded narration dialogue that will be played during the play. I am excited. I am terrified. I am terrexcited! I am excerrified!

That's it for this week, oh, and please do pop over to the H&H channel to watch the new H&H Vlog, or any of the others in fact - they are all there waiting for you to view them there! I leave you with a meaningful tune for our colonial cousins...


See you in the Future!

TTFN
Posted by Vernon Harcourt at 6:51 PM No comments:

Now coming to you in HD! What? No, not our latest Actor's Log, which you can view right here:


The HD vision is mine as today, before this weeks first meet-up, I picked up my brand new specs and now, like Sir Patrick Stewart, I've seen EVERYTHING. Okay, I haven't seen EVERYTHING really but, boy, can I see clearly, now I'm not squinting past all the scuffing. For those of you about to reckon I should have gone to Specsavers - you're TOO LATE! That's where I went and got my sexy Flexi 71s from.

They may be tortoiseshell but let me reassure you, Acting Fans, no tortoises were harmed in their manufacture, remember we have a low-to-no budget to maintain and that would be well out of budget. Anyway, enough about me and my new vision machine, on to H&H doings. Yes, as briefly mentioned Vernon and I met up at our usual haunt (both of us a bit skint to go pubbing this time) to knock our heads together. After a wild meander through some pop cultural topics we finally got around to some H&H business, one of the first being a great idea from Vern for another upcoming vlog.
The main crux of today's meet though was deciding our next steps production-wise, after letting June's Actor's Log get down to the wire we've decided to pull our fingers out and aim to get a next vlog in the can as soon as possible but without rushing it too much. Ideally though we'd like to aim for getting two of them out to you, you lucky people. Any more details on exactly what they involve would be [SPOILERS] so that's your lot for now, I'm off to try and come up with a good excuse for not being able to read the fine print now that I can see it in pin-sharp detail...

Posted by HARCOURT & HAIGH at 9:19 PM No comments:

Email ThisBlogThis!Share to TwitterShare to FacebookShare to Pinterest
Labels: Actor's Log, Actors At Large, Comedy, Conception, getting on with it, HARCOURT and HAIGH, New Specs, ready for close up, Spexyback
Newer Posts Older Posts Home
Subscribe to: Posts (Atom)