The Most Wonderful Time Of The Year... 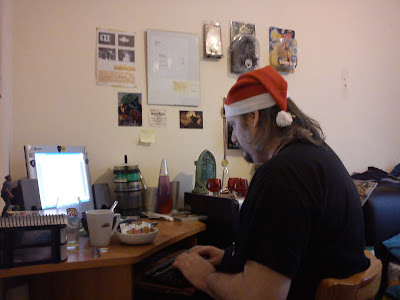 As the festive season is starting to kick in for reals, all of us here at H&H productions would like to wish you a very Merry Christmas and a Happy New Year. We will be starting the New Year with hopefully more 'Bang' than 'Whimper' with a lot more of the filming, blogging and general high jinks in the coming months.

Until January the Blog will be on a seasonal Hiatus while for us its back to planning, looking through what we have shot and editing. Now, H, pass me some more of the Eggnog and wine. See you on the other side,

Oi, you lot! Next Christmas get some proper booze in for us to nick, you gits!!!
Posted by HARCOURT & HAIGH at 1:29 PM No comments:

Well, Folks, It's that special time of year when nights have drawn in, the stars align and where we contemplate the sacrifice, the wonders and the miracles that have been, as well as those that have yet to come. The celebration of an entrance into the world, an unusual birth. What?! Christmas? Nooooo!


We've got our footage together!
And we're ready to get editing a rough cut of the first episode! Now bear in mind there'll be a lot of re-shooting yet and this rough cut will be for-our-eyes-only as we figure out which shots to change, where we need new composition and what we've missed. Over the festive season we'll be beavering away behind the scenes (and between the festivities) and hopefully (fings crossed) we may have something to show you over the yuletide season/early new year.
Until then we've got someone in to take care of our Precious Cargo: 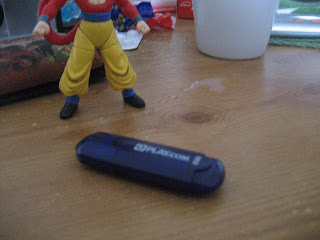 Posted by HARCOURT & HAIGH at 3:57 PM No comments:

Happens to the best of us...

Posted by HARCOURT & HAIGH at 4:07 PM No comments: 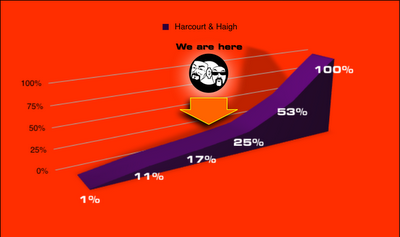 They say the it's possible to profit from calamity, so here at H&H Productions we're hoping to put calamity to good use - we're good at calamity (not so good with profit so far, though). We're on a learning curve here and what we've learned thus far is:
We need to learn more.
What better way is there to learn than by doing and what we have done is look back at our filming so far and then realised what we haven't done, not enough rehearsing, not enough shot planning and not enough storyboarding.
We also experimented with the use of ambient natural light on the first shoot for a 'grim-up-'North' ambiance, this has proved, however, that it's TOO 'grim up 'North' (for shooting indoors at this time of year that is).
A plan of Action is required and that's exactly what we've got:

1. More rehearsing
2. More Storyboarding
3. Reshoot the Flat footage, with lighting, after rehearsing.
4. Keep learning
5. Get on with it

So we may be abandoning the first flat-shot footage but it hasn't been a waste, we've learned. In that senses we guess we've already profited from calamity. Now to get down to profiting from success!

Give Us Our Props IV

Of course, you know what has to happen now... 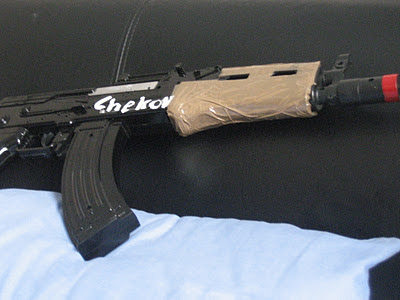 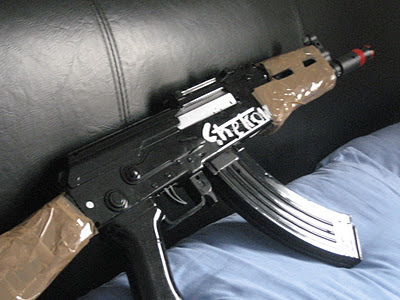 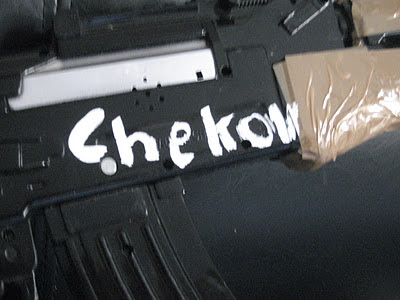 So, this Sunday gone, the british weather decided to remind us we're at it's behest by pouring it on - the rain that is. We had to scrub the intro sequence shoot which, whilst annoying, sort of worked out OK as Matt, our trusty cameraman/soundman/pretty-much-everything-else-man, was unavoidably detained by family duties. Being a father of two has it's demands, Dad's taxi being a common one.

As we beaver away with the shot footage and other behind the scenes stuff we've often got one eye on the task at hand and one on the upcoming weather. So sometimes, we look a bit like this:

We are still hoping to have at least the pilot episode done in time for early next year, so wish us luck (and clement weather)!

Posted by HARCOURT & HAIGH at 8:30 AM No comments:

Well, we've been shooting again, this time at the flat (Vern's co-habitation that we are using as H&H's base of operations) as well as the wilds of Halifax, where any innocent passerby can suddenly have a mastiff puppy brandished at him by ne'er-do-wells in tracksuits (Poor Matt!). Leaving us with enough footage for a Rough Cut of the pilot episode 'Ships Ahoy!'.
As a brief aside meet the New Guy who's been helping us with the sound:

He doesn't say much but he's cheap (as cheap as free!) and sure doesn't mind standing in the same spot for protracted periods.
Besides the New Guy we also still have our stalwart cameraman/soundman/just-about-everything-else-bloke Matt (the aforementioned Matt Birdsall, Photographer, Musician, Renaissance Man and Traumatised Puppy-Brandished-At-Bystander) who has had his work cut out for him by SOMEone having the bright idea of filming a scene in a phonebox (yes, it was ME....and I'D DO IT AGAIN! MWAHHAHHAHAHA! *Leaps out of window* *Sheepishly climbs back in window to continue blogging*). So the dialogue had to be recorded separately and in improptu fashion by Matt improvising with his iPhone.

So with luck this Sunday we'll be filming footage for the intro sequence and possibly a bit of re-shooting, let's see how what we've shot hangs together.

Posted by HARCOURT & HAIGH at 3:48 PM No comments: