Dealing The Hand You're Dealt

Hi there, Acting Fans, it's a late one this Wednesday. What with the outdoor conditions not conducive to filming (and me being a social butterfly this Bank Holiday weekend past) not much has changed since last week but Vern & I didn't want to let it lie. We wanted to get something done so we decided to organise a meet up today to do a readthrough of the script by ourselves, just to sound it out loud again and see how it flowed. At first we had a bit of a chat and a catch-up in the course of which we remembered there was something we needed to test on camera for the series involving these: 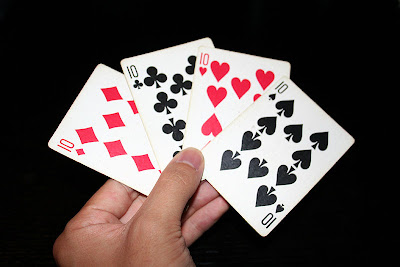 That's right, an ordinary deck of playing cards. Which is all I can tell you, besides the fact that I was the patsy on-camera and Vern was working the Magic off-camera. Oh, I can also mention that the Ace of Spades is front and centre at a certain point in the episode and, despite having TWO packs of cards, we had to use the one Vern was displaying on his wall as the other had mysteriously VANISHED (Woooooooooooohh!). After a few practices we got the desired effect and we know it should work how we want when it comes to filming the episode. Job done.
Having finished our experiment successfully we then managed to get through the readthrough just in time for Vern to head out for his appointed destination at Half 3. Parting ways, I headed to the Pound Shop and then the 99p Store to see about getting more cards (you can never have too many cards, especially the way we were using them, even moreso as they seems to be disappearing) and managed to snag two additional packs, along with 5 dice and a box of dominoes. Why the dice AND the dominoes? Well, they all came together for the princely sum of 99p (no prizes for guessing from where), BARGAIN! That's all so far this week, Internet Chums, stay tuned for Fridays update, until then...