Welcome back, Acting Fans and Bloggers, it’s Friday so you know what that means. Yep, it’s the second blog post of the week.

Since Wednesday Chris has been busy sourcing and sorting sound effects for the first episode. He wanted to get his hands on some old school sounds which he found on AudioGo, he found the albums 'Essential Sci-Fi Sound Effects Volume 1 and 2'. The only problem was that his OS couldn't handle the download application on the site. Luckily my newly-resurrected PC came to the rescue and we finally got our hands on them. 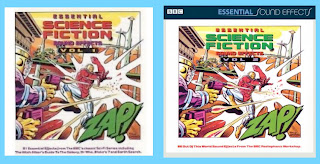 So now the first episode has all of the sound effects in place and is almost ready to go with one exception, we still need to film the end of a short additional scene. Which we were hoping to try and do today but I have at the moment lost my in-character shades. I have ordered some new aviators and they are on their way to me but sadly they didn't arrive today.

What have I been doing then while Chris has been so busy? Well, I have been finalising the shooting script for the next episode we are filming. Writing up the changes that we came up with when we did the read-through last week and also doing a bit of tweaking on the next episodes script too. All in all we are still getting on with it but it's the quiet time of sorting out all the little things that have to be done leading up to filming which, hopefully, should be soon.

As always keep them home fires burning until the next time meet for a chat,

Email ThisBlogThis!Share to TwitterShare to FacebookShare to Pinterest
Labels: ACTING, Actors At Large, Adrian, Arthur, Comedy, getting on with it, guerilla fimmaking, Haigh, Harcourt, HARCOURT and HAIGH, Heads down, Intermission, Preparation, Web series