The Kindness Of Strangers

Welcome back, Acting Fans, once again it's the Wednesday blog post, so let’s get down to it. Since last Friday we have finalised the shooting script for the next episode and yesterday (Tuesday 28th Aug 2012) Chris dragged me out on another location scouting (Yep, I didn't learn from last time).
This time to find a pub that, it turns out, actually does, you know, exist! Travelling to place where I’ve never been before. Where was it I hear you ask? (I do hear you, I'm not crazy - I’ve been tested.) Well, it is the 'Cat I' th Well' pub, 15 minutes out of Halifax by bus, up in the sticks of Wainstalls. Oh, and what an adventure we had!

First, it turned out we'd gotten off of bit too far by stopping at the end of the line, and so we had to walk back down the road to the Crossroads Inn, which we found out after politely asking the bus driver where it was (yes, yes, we'd both totally forgotten to Google Map it). As we went on our merry way back down the looong road, the bus set off on it's return leg to town when, instead of just passing by, it pulled up next to us. The bus driver who had taken us up there offered us a free ride back to the Crossroads Inn and gave us directions from the bus stop there (What a lovely bloke, never underestimate the power of politeness, kids)! Then from the Crossroads we started the looong walk down the road to the pub and it was indeed a loooong way down.

On the way down saw why indeed Yorkshire is often called God's Own County - just absolute stunning scenery. But, about half-way down the hill, a mild panic set in. Were we going the right way? Are we lost? What will happens to us out in the middle of nowhere, so far from civilisation (and booze)? Well, Acting Fans, in true actor’s fashion we marched merrily on (as The Show must) and, lo and behold, around the next corner, nestled behind a small wood of trees, was the pub we had been looking for the 'Cat I' th Well'. Hurrah!!! 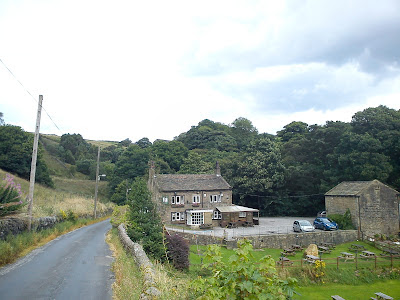 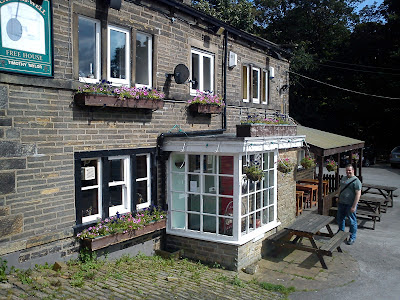 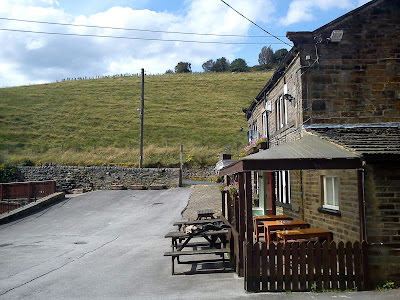 So, after nipping in for a quick drink, we set about planning shots and taking photos for a visual storyboard, even though we did forget to bring our actual camera along, you know - the one that can take actually good photos, that one that we film with and shoots the correct aspect ratio and everything (Gah!). Instead we had to use Chris's phone camera. With all that done, we then started the perilous long walk back up the hill. Oh boy, that really did put us out of breath but we marched on ever more - onwards and upwards.

When we arrived at the top of the hill we had just missed the bus back down (Damn it) and the next one would be almost a half hour! So we took up seats on a picnic tables benches by the Crossroads Inn car park. As it happened a bloke, who we later find out was called Charles and from South London, was moving some stuff into the pub for his mom after a family bereavement.
We offered to help him as the good honest chaps we are but Charles initially politely refused our offer. When he lost a couple of big books from the huge pile of things he was carrying, whilst struggling with the front door, he needed some extra hands, which we provided. As we were waiting for the bus to turn up Charles offered us lift back down into town as he was heading to the funeral directors at King Cross. What a(nother) lovely bloke (I mean, we could have been anyone)!
So, if anything, we did indeed prove that there IS such a thing as a Free Ride, in fact we got TWO!

And I saved pound too - a whole POOOUND, all in all it was a successful day and a grand one too.

Well, that’s it for now and, as always keep, the home fires burning until next time,