Welcome back, Acting Fans, it’s Friday and you know what that means it’s blog time - so let’s do this!
Since last time we have been (well, when I say 'we' I mean mostly Chris) putting in the sound F/X to the first episode and doing minor editing tweaks to the episode (I guess you could call it a sort-of 'effects shot' but that might be over-selling it). Chris then brought some rough cuts of the episodes to drop off at my gaff (AKA: H&H HQ ) for me to look over and say 'yea' or 'nay' to. I'm glad to say they passed my approval with just a few notes for minor tweaking, such as the SFX sound levels and one or two bits & pieces here or there. 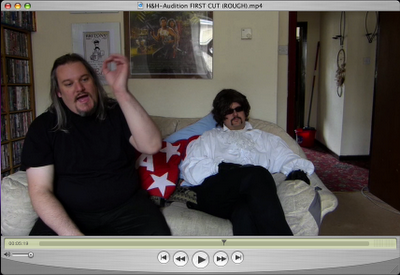 After viewing the episode roughs and making the few notes, we did a bit of re-writing on one of the next episodes, we’ve just added small changes inspired by the development of the format of the two filmed episodes. But what? I hear you ask well, well, that’s a secret you’ll just have to wait and see what it is exactly. Let's just say a 'running gag' (Maybe a clue or not...ooooh, what am I like?). 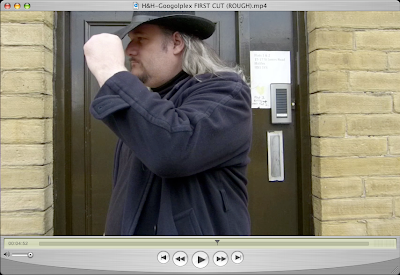 Anyway, it's no stopping for us yet just because two are down, it’s straight on with the next one I am going to be spending most of this week learning lines ready for the rehearsal next Friday. Friday? That doesn't sound non-stop does it but, yep, our next rehearsal is a week away, well, we have to do our day jobs in between these rehearsals, shoots and such - this web show of comic genius don’t pay for itself you know, well, not yet anyways!
I think that's about it for now, until the next time we speak through the written word, keep them home fires burning and as always...