Pick ups, never forget about them.

Hello, Acting Fans, and a big 'HELLO!' to everyone overseas that reads/views, yes, looking you in Sweden, the USA and rest of you out there in the big wide world (We're shouting it louder in case you don't speak English because, well, that's what we do when we're abroad anyway). And BIG 'thank you' to you all as well!
Right, back to it and on with the blog, well, what have we done this week, folks? This week we could only get our familially-entangled cameraman over for one day this week (yep, it’s starting to become awkward as Chris and I itch to get on with the rest of the series - the perils of the zero budget filmmaker, dontchaknow) so we unfortunately couldn’t do the full intended shoot that we were planning to do (*Sigh*). We did manage a pickup shoot for the end of the [SPOILERS] Additional Scene footage (Come on, you didn’t think is was going to tell you exactly what it was, did you?). Here's a hint: 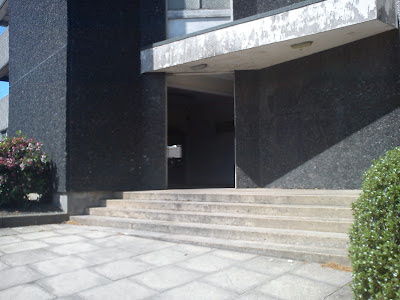 During the course of the day, a breakdown in communication led to confusement of where we were suppose to be meeting up (so the day in itself was a bit of a Comedy - of Errors, shame we didn't get to film them), though besides getting the Pickup we got into discussion of some more planning of what's next, so the time wasn't totally wasted. We will be getting on with the next webisode soon, thanks to Mr. Birdsall's generous loan of his DV camera, and be sorting out some more Additional Scene footage hopefully next week. As Ol' Churchill (the Prime Minister, not the Insurance Dog) used to say: "KBO!"