Give Us Our Props VI

Greetings, Acting Fans, it's that time of week again and we're still getting ourselves organised for the rest of the series shoot, Post-West Yorkshire Premiere that is (The audience verdict: actually not terrible).
As we mentioned earlier besides running through the next scenes (& filming & editing a brief Premiere-only intro) we were going to take on a bit more prop making to try get one of our more complicated doodads finished, at least in the major construction phase. Before you you can see the fruits of our labour: 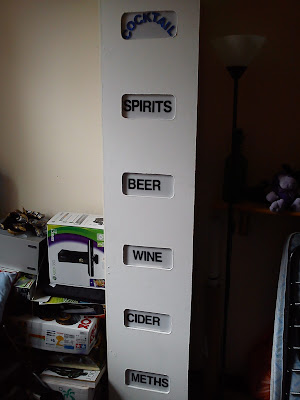 Yes, major construction on the [SPOILER] has been completed, though of course we're remaining cagey on it's function, any of you as old and haggard as us here at H&H Productions may have an inkling what it's function is. Particularly if you have a fondness for 'sticky-back plastic'. It's not yet fully complete, mind you, it still requires a few touches or retouches on the decoration front.
We still await with baited breath a reply from Valve but so far nothing (which, as the saying goes, may be good news.
Stay tuned for Fridays Blog post, as despite the lack of filming we do have something to submit for your approval.