Be Careful What You Don't Wish For

Welcome Acting Fans and fellow bloggers and people of the world. It's FRIDAY!!!! (Friday, Friday, gotta get down on Friday, Friday, Friday) but this one is a 13th (Wooooo! Beware!) So what have we gone and done today, besides avoid abandoned summer camps and burly men in hockey masks? Well, once again we've got our meet up on and again this time not in the ol' coffee shop, not even in another coffee shop but back in the pub!!! Actually it was TWO pubs, well, we are drunken actors. I have to take some responsibility, it was me who suggested it this time.

After a bit of talking away, well, talking about films & stuff once again, the conversation worked it's way around to H&H-ish territory with the phrase "Jaws in SPACE!!!" being bandied about and that is all shall be said on that one for now. We got to the end of our drinks and Chris asked if I fancied changing pubs, as The Old Cock was busying up and knowing sometimes our lively conversations draw in odd folk, sometimes REALLY odd folk (& we're Actors we know odd). 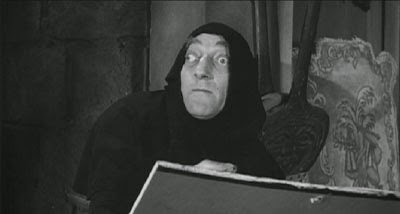 He thought it might be good to move, to avoid getting minor hassled by some of the clientele while we were trying to sort stuff out. We'd gotten to thinking about the things we've filmed so far and reminiscing about the 'Grog' shoot in particular where, while in People's Park filming, a drunk bloke had started trying to get us into a conversation whilst we were trying to film and this lead us on to another idea for a H&H future Vlog, making a comedy version of the event. Seeing how it was getting busy I thought it wouldn't hurt to try another pub but...well, yep, you guessed it as soon as we got our drinks in and sat down outside we got hassled by this odd guy Chris vaguely knew (they'd crossed paths during a shift on his second job). Weird, eh?
Fortunately this odd fellow didn't hang around as long as the bloke in People's Park, so we managed to get back to more H&H business. Looking over what we got so far, which now amounts to about 8 ideas almost ready to go and an idea for a live show on the back burner. With all that in hand, well, I guess we best get one filmed, and on time for this month, too. Which we shall hopefully be doing some next week as, due to a quirk of shift, Chris is free all week long...and me? I'M FREE! *Wink*


Well, that's yer lot for now, see you in the Future!

Posted by Vernon Harcourt at 10:58 PM

Email ThisBlogThis!Share to TwitterShare to FacebookShare to Pinterest
Labels: Actors At Large, Booze, Comedy, Conception, getting on with it, HARCOURT and HAIGH, odd folk, People's Park, Planning Ahead, pub, Weirdness