Hello, Acting Fans, fellow bloggers and people of the world wide webs. HELLO, yep, it's Friday and time for us to update you on whats going on down here at H&H HQ.

Well at last me, myself and Chris finally got to get a meet-up done, (YEAH!) and, well, Chris came armed with an idea about extending the background for H&H, something about our two criminal actors' acting careers, which led to us compiling a list of fictional movie titles that both of them have starred in and, well, I'm not going to give too much away though I will tell you the idea is a take on a certain famous British film studio. Oh, and these fictional movies are going to big overseas but to tell you why would be [SPOILERS]. And, boy, how much did we laugh at the titles. I do indeed think you will like them, we even talked about maybe evening filming some of the trailers for these movies (Man we do like to make this hard for ourselves, but who said it was going to easy) 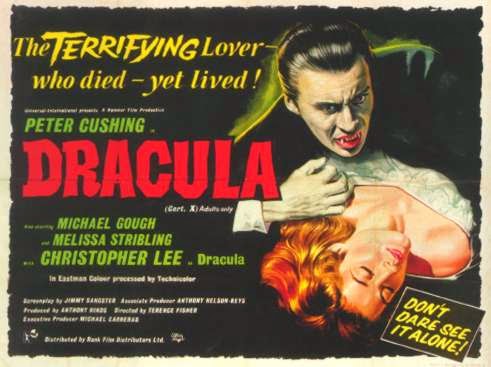 On a completely unrelated note (alright, alright, it might be a bit of a clue) Chris also brought down the 1958 Peter Cushing/Christopher Lee Dracula as some, erm, research...yes, that's it research into fine acting! After our Richard Harris viewing went so well, we thought we'd give a film a go and see what it brought up ideas-wise. As we watched it we were reminded that Peter Cushing is just one of the finest british actors to grace the silver screen, proper "ACTING!"all capitals. He was indeed that good, his line delivery seemed sometimes more modern and sophisticated compared to the actors around him plus his subtle facial expressions were amazing, brilliantly showing the passion and emotion behind a polite, stiff-upper lip exterior. Why is this important to H&H? Well, if we're going to learn, why not learn from the Best? Looking over old actors and looking at how they did it can still teach us a thing or two and listening to their off screen antics can be handy too. You never know what you might spot though.

In Yesterday's feature it was the two or three scenes in it that suddenly went broadly comic, in a way that western movies don't tend to do these days, it reminded us a bit of the way they still shift tone, even in more recent films, in Hong Kong and Chinese cinema. We also spotted the more static use of the camera in the shots, with more panning than camera movement, especially when it came to movement between two tiers, and less inter-cutting than more modern films. Lastly we realised neither of us felt we'd be as comfortable dashing around in a cloak as Sir Christopher Lee, he surely must have fallen over a few times - never mind leaping over tables! And all without the aid of a stunt-man (as far as we could tell). Crikey! All in all it was an eventful and funny day. We got quite a bit done, because sometimes a little world building is just as important and can add more to the characters, even if it's just in our heads for now.

Posted by Vernon Harcourt at 10:22 PM