Hi there, Acting Fans, and if like us you're somewhere in the ol' UK (especially if you take a look out your window) you can probably guess that, yes, the suddenly Scandinavian weather has put the kibosh on filming. That AND my four days straight of day job workshifts this week (that is with only Sunday between my last workday and the run I'm having this week including today and tomorrow), well, we've got the motive but not the opportunity. That's not to say our week has been entirely uneventful, you see Vern may have gone a bit 'method' with his role in H&H - he's broken the law.....
of Facebook! 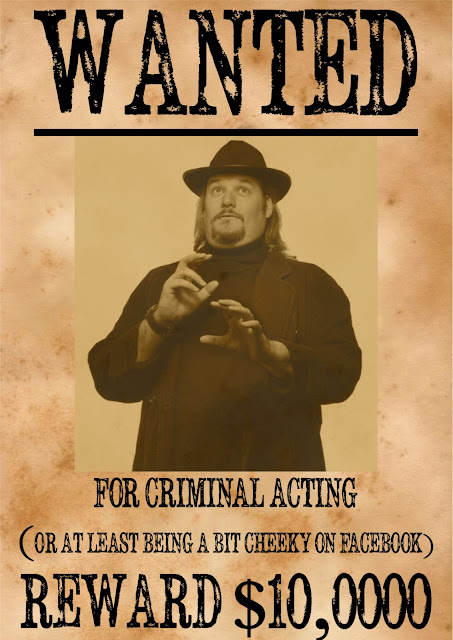 Yes, Acting Fans, Vernon Harcourt has become a Facebook Outlaw - banned from posting to others' walls for a whole TWO WEEKS! What did he do? Well, It turns out Facebook don't look too kindly on a chap doing a mass posting to his friends unless you cross their palms with moolah (hence those relatively new 'Promote' buttons). Vern has copped the wrath of Zuckerberg's minions for having the temerity to share OUR Easter Egg of a comedy short we made OURSELVES with our own brains and hands and stuff with all his FB friends by posting it to their walls himself. AND HE'D DO IT AGAIN FACEBOOK BWAHAHAHAHAHAHAHA!!!

Sadly, yes, that's it for this week so far Internet Chums, fings crossed we have more positive tales to tell on Friday,