C'mon grab your friends, We'll go to very distant lands (alright, somewhere in Halifax),
With Vern the Dude & Chris the Human, The Fun will never end!
Greetings, Acting Fans, it's Friday update time once again and...I don't quite know how to put this...well, we've only gone and actually done something!
Yes, It's true! Flabber your Gast! Not only did we get the shooting wrapped for the next 'Behind The Acting' as Vern mentioned on Wedneseday we did indeed get up to some Second Unit Shenanigans last night. Fearless of the wind-chill factor, we hung out on the platform of Halifax Station to catch some nice establishing shots. 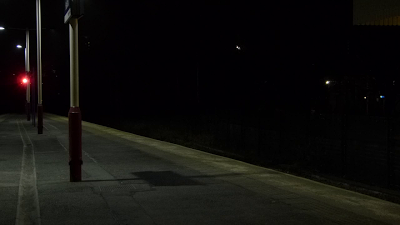 That, however, is not all. We had hoped to find a sort of elevated vantage point for some shots of the tracks. We didn't find one. What we did find instead was some potentially brilliant locations to shoot. We only had to wander a little off the beaten path to find some spots of Halifax that we had never seen before and it all started here:

So keep 'em peeled while watching upcoming episodes of H&H, Acting fans, the sharper-eyed among you might be able to spot the locations.
As we got further from the Station and, as it turned out, lower rather than higher, we decided to postpone the elevated shot of the tracks for a trip to a local landmark Wainhouse Tower to take some shots of it in all it's glory by night. Once we shot the tower we took the scenic route back to King Cross to check out the usefulness of Savile Park for some scenes and it's looking promising as long as we can get some additional bodies up there with us. That was it for this week, Acting Fans, apart from the fact that today IS the First of March and we don't want to leave you empty-handed at the start of a new month - so here's the next episode of 'Behind The Acting' to tide you over!

Email ThisBlogThis!Share to TwitterShare to FacebookShare to Pinterest
Labels: Actors At Large, Adrian, Adventure, Arthur, Behind The Acting, Busy Busy Busy, Comedy, getting on with it, gorillas in the mist, guerilla fimmaking, Haigh, Harcourt, HARCOURT and HAIGH, video, Web series, Youtube