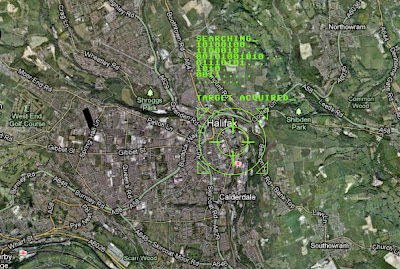 A fine Wednesday welcome to you, Acting Fans, time for the latest from H&H Headquarters. We're still made up with our new camera but, unfortunately, a confluence of events has led us to not be able to get filming recently. Our prospective filming schedule ended up clashing with some well-deserved time off for Vern's flatmates. Not wanting to inconvenience the folk who have so generously permitted us to film where they are co-habitating with Vern, we've been up to some more planning and sketching out of the filming of further episodes.
To that end last week I took my fellow co-creator on a fair trek to the outskirts of Halifax town centre for a spot of location scouting. A bout of location scouting that turned into a wild goose chase or, in this case, a wild pub chase.
A gag in one of the later episodes calls for a Public House that appears somewhat isolated and I was sure that there was a possibly-suitable pub on the way to Southowram (or as sure of the possibility as one can be from a half-remembered fairly eventful works Christmas do from the mid-90s, yes, alcohol was involved). We began with a leisurely stroll to the bottom of town and, by the time we reached the bottom of Southowram Bank, we had already decided on one location (for a different scene), thanks to the suitably industrial-looking rear of a local retail building.
Then came the more arduous part of our trail - the slog up the steep cobbled path through the woods up to Godley Branch Road. We got there up there and, after a brief pause (just until we could feel our calves again), made our way along Beacon Hill Road to Bank Top.
Still no sign of my half-remembered mystery pub but we did get a rather lovely vista of Halifax that may feature at some point in the series (and that I briefly lost Vern to for a while, he was totally immersed, bless him). From Bank Top we took Southowram Bank back down to the bottom of town and still nary a trace of our elusive Public House, so our best theories are it's either closed down in the mean time, maybe turned into housing, maybe demolished or it's some kind of Brigadoon Pub that only appears when the moon is in the right phase. Still, not a total waste of time and effort as we did sort a couple of other things and we got a bit of exercise to boot (we need it, we don't get out much).
Stay tuned for this Friday, folks, as the Pilot Episode is still about to drop - so keep your peepers peeled!

Christopher Haigh
Posted by HARCOURT & HAIGH at 11:40 AM