It's midweek and here we are again, Acting Fans, it's time for the Wednesday update and, well, unfortunately there's very little to update. As we've mentioned before Life finds a way to get in the way at this time of year, especially when it comes to getting filming done. We've had one cautious eye on the weather this week but my shift pattern has meant that, even if the going had been good Monday/Tuesday, I was unavailable. Now today the clear blue sky taunts us as it's Vern himself whose unavailable but why? 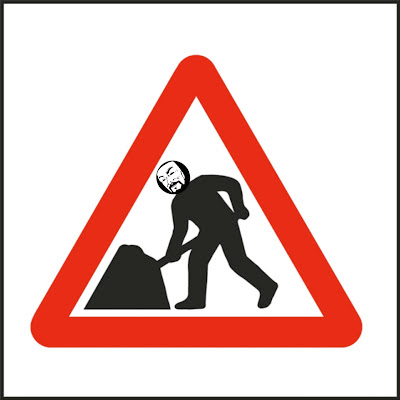 Well, Acting fans, let me tell you, as it turns out chivalry isn't totally dead, just sort of badly beaten and lying in the gutters bleeding, gathering it's breath - it'll be okay, just give it some time to rest and collect itself. Vern is unavailable over the next couple of days as he's helping his good lady Jo to move in to her new living quarters like a proper boyfriend/partner/whatever-your-preferred-term (&, let's face it, the exercise will do him good).
This isn't entirely terrible news for the production as at the moment I seem to have a bit of excess goop on the go, which I'll hopefully manage to shift by the time we get to filming again, which looks like it may end up being next week. So that's it for this week - nothin' doin', I'm afraid. Stay tuned for Fridays post when we'll be able to let you know some actual stuff!