Belated greetings, Acting Fans, to this late breaking blog! With news that's both urgent and not! This week with the breakdown of my shifts and the encroaching Panto season making it's presence known meaning my hours at work are going up (work being a theatre and pantomime being it's bread and butter) we've had time for little else shooting wise this week. Vern has been on with the shot selection for the filmed scenes of episode 5 and that's about it - except for one thing!
Today it has come to our attention that there has been a potential script leak during production of episode 5. Somebody, we're not sure who yet - possibly some greenhorn intern in the production, left a shooting script on site after Wednesdays shoot! 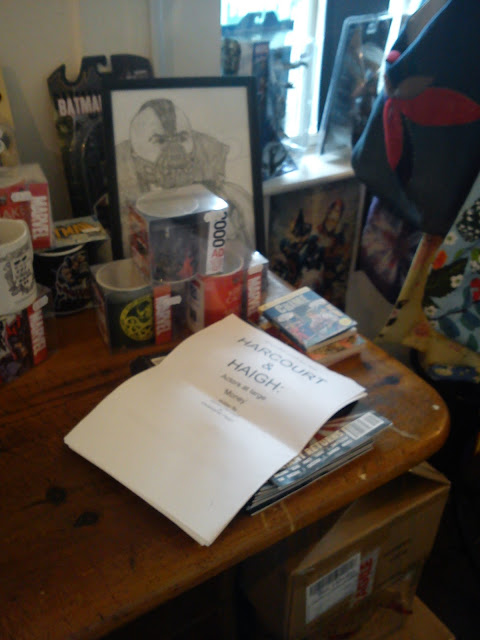 The Horror! All those precious [SPOILERS] laying about willy nilly at the Piece Hall! For ANY  Tom, Dick or Harry to get their filthy paws on them!
Luckily for us the filthy paws in question belonged to our old chum, Proprietor X of Legacy Comics, Simon Shaw. I retrieved the script today but who knows what secrets Simon has gleaned in the mean time? Maybe he'll let you in on a spoiler or two, for a PRICE! So 'Harcourt & Haigh' join illustrious productions such as 'Doctor Who' and 'Batman Begins' in having vital scripts leak out - but WE got OURS back, HA! Shows what you know Nolan and Moffat!
This weekend see's myself and Vernon caught up in a bit of a social whirl but the production will be back on track next week, Acting Fans, so never fear the show goes on. Until next week...