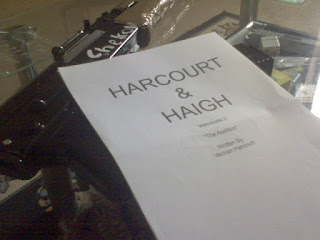 Greetings, Acting Fans! Once again Blog day rolls around, what? Already? Sometimes it really does feel like we're travelling at 67,000 miles per hour, so this is going to be a bit of a quick one.
Since the completion of the Pilot we've had a mini-test-screening and, so far so good, the Test Subjects* all appear to be laughing in the right places. The most recent gatherings of H&H Productions have been focused on planning the next phase of the series, Episodes 1-to-6B. Happy with the 10 minute total runtime established by the Pilot, we have done some minor retooling on the episode scripts, as when initially conceived we were estimating between 5-to-7 minutes an episode. This has also given us the option of re-introducing, or re-integrating in differently, additional scene ideas that we had originally not thought possible, yay!
This Monday saw us gathered Chez Vern to do a line run, dialogue tweak and basic runthrough on the next episode scenes to be shot and they're dialogue heavy so we're going to need all the practice we can get!
Unfortunately the next time our schedules coincide will be this weekend sometime so we're hoping to put all three H&H Productions heads together to hammer out the actual shooting schedules but, don't worry, there'll still be a little sumthin' sumthin' this Friday.
In the meantime, if you haven't already, why not drop by Channel H check out the decor and the first teaser promo - please take your shoes of before entering or, at least, wipe your feet first.

*= No Animals were harmed during the testing of this web series, cajoled & threatened, yes, but not actually harmed
Posted by HARCOURT & HAIGH at 3:13 PM