Wotcha, Acting Fans, and welcome to Fridays belated blog update. We're coming to you a little later than usual - but it's for a good reason. You see we got a bit of a gap in our schedules this week, which meant we could bring forward the planned first cut of episode 4 (originally pencilled in for next week). 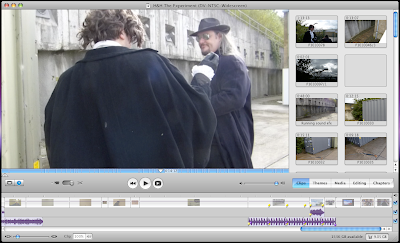 So bright and early this morning, oh, alright, at about quarter to eleven Vern got his bod down to the editing suite (Yes, yes, my bedroom) and we got into the cut. Once again, as with episode 3, being able to view the rushes on Vern's PC to make the shot selection has really speeded things up.
This time I'd also done my homework with some additional preparation too (minor trimming of the calls to 'Action!', etc. and making the odd scene break) so we got to the final first cut in about 4 and a half hours. We also managed to fit in a minor tweak to episode 3 today, as Vern had taken a look at some of the missing footage and found a nice brief shot that we could use to replace one in the edit where we'd originally used a double of another shot. The new shot had a nice little touch of establishing something that the episode was missing before, well done, Mr. V!
That means episode 3 is well and truly ready to hit the 'Tube at the end of next week, bang on schedule. Unless, that is, we have some notes from our test audience, the unwitting victims helpful volunteers rounded up by Vern to be subjected to a preview of the episode this weekend. Fings crossed, everyone!

We only have a minor (but body-heavy, yeah, we need some extra bodies) scene to shoot to finalise episode 4 and, if all goes well, we'll be cracking on with episode 5 soon, oh, and a little something else besides is on the cards but what exactly? Well, That would be telling. That's all for this week, Acting Fans, stay tuned and keep frosty.

Email ThisBlogThis!Share to TwitterShare to FacebookShare to Pinterest
Labels: Actors At Large, Adrian, Arthur, Busy Busy Busy, Comedy, editing, Episode 4, getting on with it, guerilla fimmaking, Haigh, Harcourt, HARCOURT and HAIGH, In Production, in the cut, Web series, Youtube