With the main body of the pilot's footage completed there is still a little something else yet to do, and it relates to our previous difficulties some.
Due to a TOTAL LACK OF ANY COMMUNICATION AT ALL WHATSOEVER (THANK YOU SO MUCH) from large-business-in-Halifax-that-shall-remain-nameless who lease the top levels of the Car Park that was our first choice for the location for certain scenes, we have to go out of Halifax to do some filming tomorrow. That means...
Yep, ROAD TRIP! 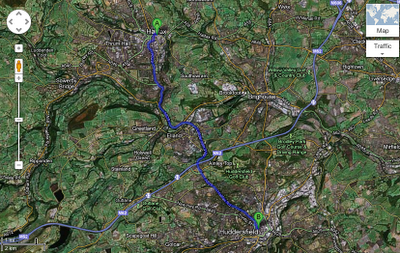 "One small step for man. one giant leap for Halifaxkind."
We are off to the far away mysterious place of...*Ahem* Huddersfield. To film two scenes, yes, you read that right, TWO specific scenes that are not episode-specific so much as they are of a format we have conceived of which is going to form a sort of intro bumper to the episodes. With the modification of the pilot script by creating an additional first act, we have reconsidered which of these is most suited for the pilot and, wouldn't you know it, it's one that we haven't filmed yet. Oh, well.

Of course we are going to use all our well-honed Rules of Guerrilla Filmmaking to make this happen, so lets hope they work.

And it will not end there, we will be straight back into editing room (A.K.A Chris’s Bedroom) to put it all together. Then it’s on with the planning of the next episode and on to getting that next something that’s gonna happen, well, happened. Trust me, it will happen and soon.

So long for now acting fans,