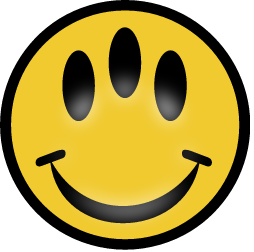 Greetings, Acting Fans, welcome to this down-to-the-wire Wednesday blog that will eventually get around to H&H Beeswax. I'm afraid my approach has been a bit lackadaisical this week as I've got a bit of a pre-[The Holiday Festival Which Shall Not Yet Be Named] holiday which started with a weekend in Liverpool at the Cosmic Trigger play and Find The Others event.
I was one of the many who stumped up a bit of cash via crowdfunding to help fund the production celebrating the life and work of the late Robert Anton Wilson, the late countercultural author and thinker, get made. Having not been to Liverpool since I went on an art gallery trip some time ago, I thought I'd do the full weekend and not just the play.
I'm happy to say that the play was a lovely shambles that told the story effectively, funnily and in a way that was a great tribute to Wilson and to the other major figure the play was dedicated to, Ken Campbell. You may not have heard of Ken Campbell but he is a fascinating figure from british theatre (and he was almost Doctor Who once, you know - he lost out to Sylvester McCoy, who could be considered something of a protege - he was in Ken's roadshow before that) who himself organised the production of a dramatisation of another of Robert Anton Wilson's works 'The Illuminatus Trilogy' as a play of epic length.
Back down to earth after the weekend, I have been in a bit of a recovery mode but H&H has never been far from my mind. Some of what I saw over the weekend has caused an idea or two to percolate and reassured me that H&H are just about the right kind of shambolic themselves. Despite my rather relaxed attitude this week (& a Tuesday [The Holiday Festival Which Shall Not Yet Be Named]-shopping trip with my parents) and thanks to Vern being unexpectedly free, we have managed to knock our heads together today and get the H&H creative machine ticking over but I'll let m'learned colleague fill you in on that at the weekend.