The Photo That Started It All

Welcome to the ‘HARCOURT & HAIGH: Actors At Large’ production blog, it’s all about the Booze, the High Adventure, the Violence…..Oh, and the acting. Erm, Sorry, I mean the ACTING! (*Holds hand up to the sky in dramatic gesture*)
So what exactly is HARCOURT & HAIGH?
Well, it’s an upcoming web-based comedy show about two drunk out-of-work actors who are trying to find that breakout job, or to just survive on a day to day basis and to keep themselves topped up with booze by any means necessary.
Trust me, you wouldn’t like them when they’re sober.
But I’m getting ahead of my self, sorry, I do that. I am Vernon Harcourt, one half of the actors, writers, directors and co-creators of what will be ‘HARCOURT & HAIGH: Actors At Large’. Hi there. That's me on the left below.
My partner in crime is Christopher Haigh and it all started with this picture: 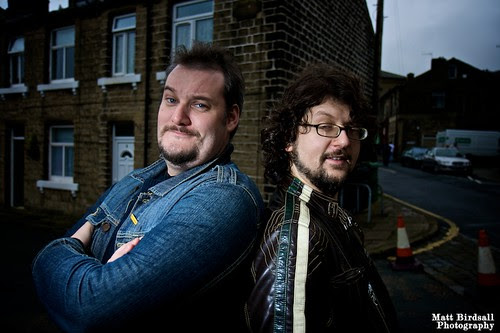 The whole idea for the series comes from a trip over to the Marsden Jazz Festival (at which we skillfully managed to avoid any Jazz) along with great photographer and buddy of ours, Matt Birdsall.
With a lack of very attractive people Matt was willing to settle for using the two of us for some shots and took the photo above of myself and Chris stood back to back.
Something about it got me thinking and from that pose the idea for the show grew, it also inspired the name of the show.
It was a few months later and on a drunken night out (What can I say? We’re Method) that I explained my premise of a Web-based series of comedy shorts to Chris and we fleshed out the characters and the idea in more detail - thus Harcourt & Haigh were born (So to speak).
Not being averse to media domination, we also entered a TV sitcom length pilot episode script in the BBC Writersroom 2010 competition.
Alas the BBC judges, Hm, lets just say we don’t know what they said...but they were wrong.
No, I really don’t want to dwell - I just think that they didn’t get it, or maybe it was just TOO funny for them. I mean ‘Two Pints Of Lager and A Packet of Crisps’? Need I say, er, write more?
What to do? Roll up our sleeves and get on with it. In the words of the late great Freddie Mercury "The Show must go on!"
Now let’s fast forward to….actually, now and, a lot more of conversations later, we are at the stage of starting it up - we have some test shots for the costumes (courtesy of Matt),  a trailer in post and a long and interesting (metaphorical) road in front of us. So stay tuned for updates on the process of Harcourt & Haigh moving from our Brains to a screen near you!
You all come back now.