Just give us a moment, we're composing ourselves.


There's always tomorrow, it's only a day away.

Give Us Our Props! II

Some jobs are easier than others.
For example, take a look at this little beauty...

Knocked out quite easily and pretty sharply after conception (with a great deal less swearing than the creation of the HAiL 2001, could I find a decent lens? Not easily, I tell you. Many hours of fret were had until accidentally passing the scented candle display in Poundland). As the filming of the first scene of the series rapidly approaches we crack on with our doings and makings behind the scenes.
For instance, what's Vern doing here?


I'll tell you one thing, he's not building a playhouse for the children.
It might have something to do with these:

You'll just have to wait and see...
Oh my, Is that the Time?

I really must be going.
Hello, Goodbye.

Posted by HARCOURT & HAIGH at 7:44 PM No comments: 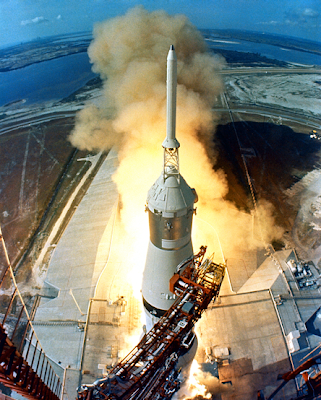 Can you feel the Antici....

Well after almost two years of talking and planning and yet more talking, here we are two Promos and a costume test later - It‘s finally going to happen.
We are fast drawing near the beginning of series filming. Wow, it seems to have been such a long, long metaphorical and physical road getting here.
(I’m sorry, guys & gals, I’m welling up here. Hang on, let me take off these tight pants - Ahhh. There, that’s better.)

All of that writing and re-writing and we’re still not done yet. Still more adventures of Harcourt & Haigh to commit to the page and then to the big/small screen (depends on how swish your monitor is, dunnit?).

I mean, whoa, has it really been two years since we first planned out this idea?
Anyhoos back to the point - the Countdown starts right here, right now:

EEP! Sorry, I just scared myself (It’s alright, I didn’t wee - well, maybe just a little - but it’s an excitement wee). So stay tuned to our frequencies for more updates and hopefully at some point soon in the near future the first Webisode!!!!!

Welcome to the Pressure Cooker, as series filming draws nearer and nearer we scrabble to get things together for shooting (but that's another post).
In hand we have the Costume Test Shoot, a couple of Promos in the Can and a 'Behind the Scenes' short, in front of us - everything else.
Today, however, we would like to take the time to say, 'Thank you'. Filming somewhere that belongs to someone else is a privilege not a right and we are extremely grateful (to the Max!) to the providers of our first two locations.

Location number 1 for the 1st Promo is favourite local haunt The Piece Hall, specifically the shop of our chum (and Promo Co-Star) Simon Shaw: Legacy Comics.
Many thanks to Simon for letting us behave in a criminal fashion in his work environs (and, as we promised Simon, we only partially destroyed it).
Despite our shenanigans Legacy Comics is still open for business supplying your favourite Four-Colour Gentlemen's (or discerning Ladies') Relish.
In fact if you're in the West Yorkshire area and like a bit of Cosplay (dressing up to you and me) be sure to check out Legacy's annual Halloween Havoc competition.

We'd also like to thank Steve & the rest of the crew of Halifax Kitchen Company Limited for supplying the Location of Promo No.2 by permitting two strange blokes who walked in off the street (and a couple of chums) use of one of their display kitchens to double for [!!!REDACTED FOR SPOILERS!!!]. Thanks to all of you there, the offer of cups of tea, though refused, was greatly appreciated. In fact our learned colleague Matt even asked us what we "had on you" (don't worry the negatives are in the post).

Our appreciation knows no bounds but we must press on, we've got Props to make and Scenes to Take.

Posted by HARCOURT & HAIGH at 7:05 PM No comments:

Give us our Props... 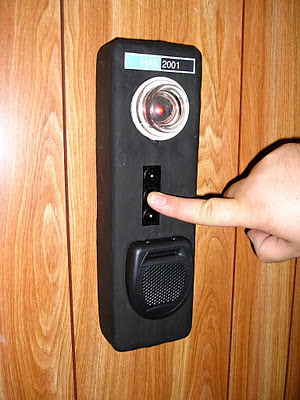 As a Low-to-No-Budget enterprise we've had to turn our hands to a bit of creative enterprise, as well as fabbing our own Boom Mic stick there are one or two Props that we've had to make ourselves.
We wanted to have a few odds-&-ends here and there that would be unique to the series, so we had to roll our sleeves up. Above you see the first of 'em - the 'HAiL 2001' intercom system© (Made in Taipei). Below you can see how we got there.

As to why it looks like that? While we're sure everyone will get the reference, well, to find exactly why you'll just have to watch the series.

See you next time.

Posted by HARCOURT & HAIGH at 1:16 PM No comments:

The Look: From another POV

Well,  I'm back, and I’ve got world's last piece of chocolate.
Mmm, chocolate. Sorry. Well, I'm all settled into my new place and now it's my turn to say something on THE LOOK. 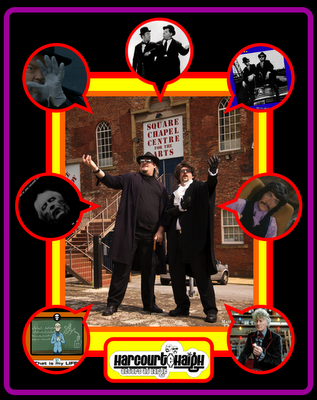 When Chris and I were discussing what Harcourt & Haigh would look like as characters we couldn't really come up with anything so, in the very first draft of the first episode (wow, seems like such a long time ago now), I just had them down as wearing shirts and ties and left it as that (Low-to-No-Budget don'tcha know), with every intention of going back and changing it at a later date.

After Chris read it, during a later conversation, I saw a funny look appear in his eyes (this is not always a good sign but it's best to play along when it happens) he came out with his idea of what they should look like. As he first explained this to me I will admit that I was not too sold. Mainly because I couldn’t picture it, though I did like the idea of Chris looking like a cross between Jon Pertwee’s Doctor and Jason King. But I just couldn’t see them fully realised.

The more we talked about it (and the more his speech slowed down to human speeds, that boy's tongue moves quicker than a Water Snake's sometimes), the more I warmed to the idea. However when it came to me wearing a hat I really thought, 'No'. It wasn't my style, I didn't think I could pull off wearing one. Shades. yes. But a hat, no.
Then we finally got it all together for the test shoot and when I saw both myself and Chris in the outfits it all came together, I knew Chris had come up with a great paring and that it was going to work. And that Chris' idea was genius.

The possibilities! So much fun to be had with the costumes over the course of the series. So say tuned to enjoy the upcoming adventures (or rather misadventures) of HARCOURT & HAIGH: Actors at Large.

Posted by HARCOURT & HAIGH at 1:34 PM No comments: 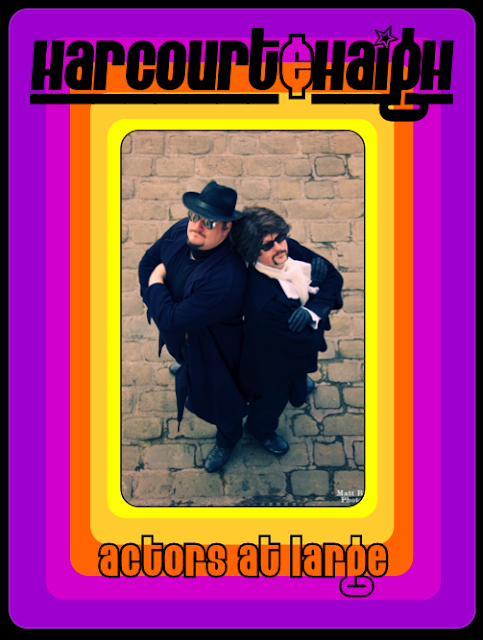 Click image for Full Gallery
Posted by HARCOURT & HAIGH at 11:59 AM No comments: 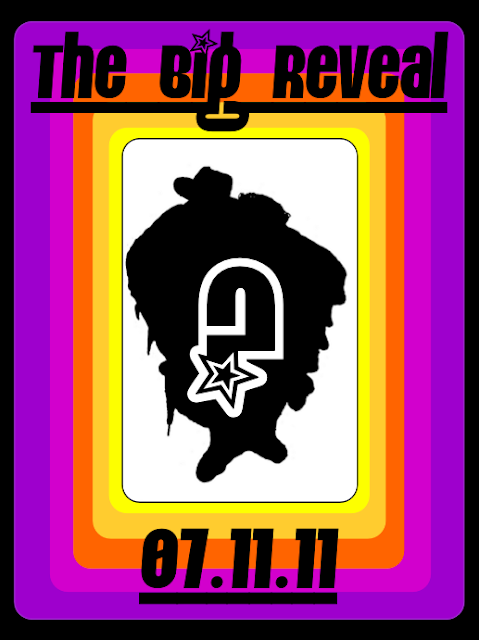 Naughty, aren't we?
Posted by HARCOURT & HAIGH at 9:44 AM No comments: